Notes: Star-up in this game is really important for many heroes especially the new ones as it will unlock some broken passive. You need 1 copy to reach 4-star, 2 copies from 4 to 5-star, 3 copies for 5 to 6-star, and 5 copies to purple star (maxed limit break).

You can farm 2 shards a day for each unit in the “Pact” system (up to 5 units a day), and up to 6 additional shards a week for old units in United Battle game mode. 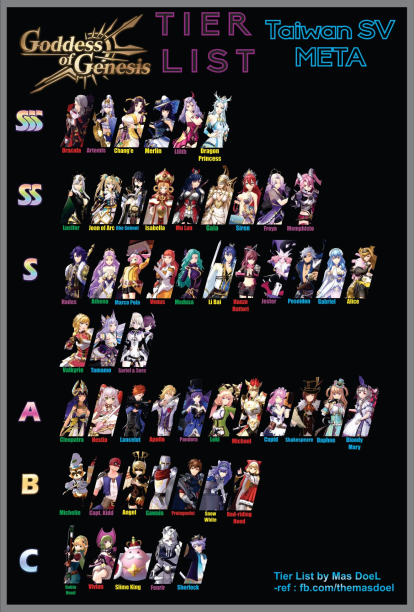 Lucifer (Earth Assassin): The strongest assassin at early and mid game with the passive to act twice in a row as long as she kills someone or does a critical hit. The early PVP meta is just all about who has the stronger and faster Lucifer. People will usually stun/freeze/petrify the tanks to bypass protection and let Lucifer do all the works. However, she falls hard late game as her base SPD is low and PVE mobs have higher HP (also because some new cancer units appeared).

Lilith (Dark Assassin): A tank destroyer assassin with decent AOE damage and high SPD. The higher her star the higher the defense she ignores, maxed at 50%. Her ultimate also does damage according to the target’s maxed HP based on Charm stack for up to 50%. She is an irreplaceable unit that you won’t regret building for Endless Corridor later (an end-game idle map with monsters that have millions of HP).

Merlin (Light Mage): if early game is all about assassin and single-target damage then mid and late game is AOE meta. Merlin is one of the best mid and late game mage because of her normal skill as it will make her do an AOE damage every time a unit in our team does, and it also comes with debuffs if you equip her with Hera’s sigh (a weapon that inflict a debuff after each AOE damage ability); and of course, it is still the best weapon for Merlin as of now.

Chang’e (Light Priest): Her signature skill is her ultimate that throws a Moon Lantern in front of the team. The Lantern has 60% of her HP and 100% of her PDEF & MDEF and is immune to critical strikes. This ability is really cancer because it acts as a taunt skill that people can only target nothing but her lantern. The lantern will also reduce AOE damage by 60% for the team at 5-star and 90% at maxed limit break! However, she only becomes strong at 6-star as she will throw her lantern immediately at the start of the battle (without leaving cool down on her ultimate). She is not really useful before that as her base SPD is not really good to make her go first in battle, and her heal is based off her damage so don’t go harm for her if you want a real healer. She is truly a late game PVP unit (that got the first ban every damn time).

Isabella (Light Priest): Here comes the real healer! She heals, she removes debuffs, she gives DEF up, she brings shield, and she can also remove buffs from the target with her basic attack. You can never go wrong with Isabella.

Dracula (Fire Tank): As a Dracula of course he can heal, and his damage is also noticeable cause it’s based off his MDEF and it ignores shield (you will want to build MDEF for him anyway cause he increases the MDEF of all ally units by 50% his MDEF). A strong Dracula can solo your entire team at early game so watch out! His signature skill is his normal skill that links himself to everyone in the team, they will take 50% reduced damage while he takes 25% from that. On top of that, his passive allows him to stay alive after his HP dropped to 0 for the whole turn, and heals him for 30% of max HP in the next turn. He is an SSS tier unit for a reason.

Valkyrie (Earth Tank): People usually run Valkyrie along with Dracula for the perfect protection. If Dracula saves your team from AOE damage then Valkyrie will protect everyone from single-target damage (as long as she doesn’t get cc-ed, but at 5-star she will remove all cc from herself before acting with 50% chance, and 100% chance at 6-star). In early and mid game PVP you will want to give her a lot of SPD so she can free herself from cc before their Lucifer acts, since the meta is all about cc the Valkyrie and let Lucifer one-shot.

That’s all for the recommended SSR units. I will try to make a review on all old units when I have time, but you will never go wrong with the units above. Reviews on new units are also coming soon.

For SR and R there are actually so many useful units that I can’t review them all. Since they can be promoted (SR can go to UR and R can go up to SSR), you can pick the units that fit your playstyle and also the elemental bonus within your team. by Henry
For more news and game discussions: discord.gg/edenofgaming